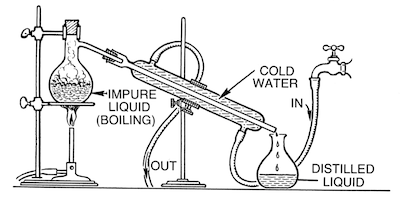 When water is extracted from the sea, lakes, dams and reservoirs, it contains impurities that make it less desirable for use in industrial, medical and even household applications. As a result, it’s taken through a process of distillation, which involves heating up the liquid until it transforms into vapor. Once water has completely turned into steam, it’s condensed back into water in a clean container. The resulting liquid has less contaminants and can now be used for a variety of purposes.

While there’s no specific record of when distilled water was first used, it dates all the back to Aristotle’s era. Records show that sea water was distilled in ca. 200 AD to create safe drinking water for entire populations. Over the years the process has become more refined, using less energy and time.

What is distilled water used for?

The impurities in regular water can be corrosive to mechanical parts, and even toxic to humans. It can also negatively impact medical, chemical and biological specimens as well as lab equipment. As such, only pure water is essential in these instances, and distilled water is one of the cleanest forms of water available. What's more, it's used for applications such as:

Is distilled water safe for drinking?

Depending on the level of purification, distilled water is usually safe for drinking. This is the case when the liquid is sourced from a reservoir that was contaminated with toxic compounds that are poisonous for human consumption. However, the process is also known to remove certain essential minerals such as magnesium, iron and calcium, and electrolytes such as potassium and chloride. This makes it less desirable for long term drinking, which may require other forms of purified water.